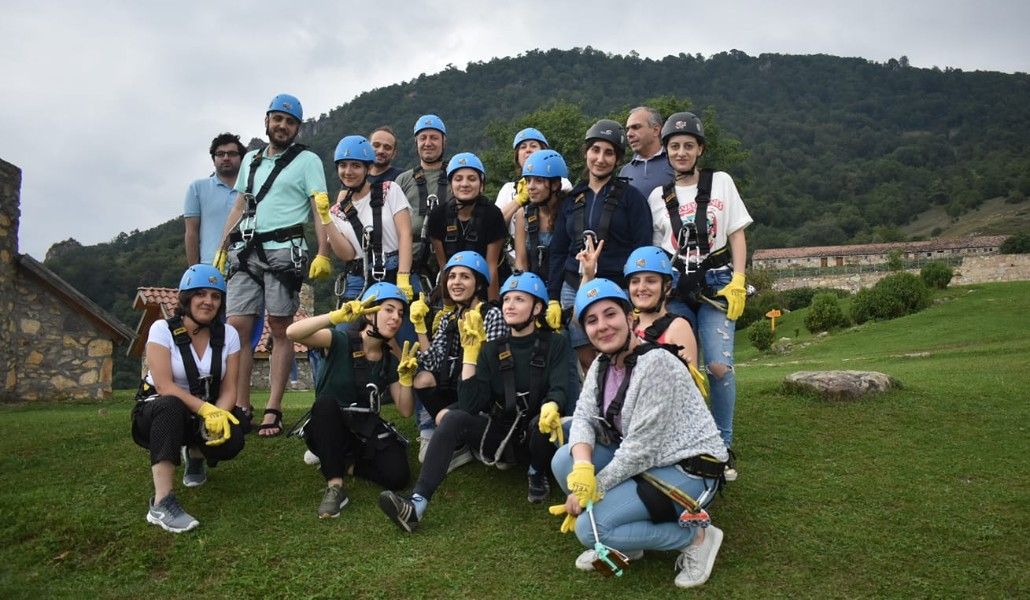 Business from Zero in Armenia: Commitment Makes it Possible

Starting a business seems exciting and complicated at the same time. Yes, it’s not easy, but you don’t need to have deep pockets or be a business genius to start one. Big things have small beginnings and behind most of the successful businesses, there is tremendously hard work and commitment. You just need to believe in what you do and you’re halfway to your entrepreneurial success.

The buttoned-down business world is much more colorful from inside with its inspiring business stories. And here you can find some down-to-earth examples of Armenia-based businesses that reached success with (almost) no money.

Many of us know the feeling when the light bulb goes off, a great idea comes into our head, we become motivated to start something, but how many of us go after that idea? The story of Arara is among those rare occasions. The co-founder of Arara, Boris Sahakyan, recollects the memory back in the 2013 “The Idea of “Arara tour” was just a spark during a conversation with my brother, which seemed rarely possible given our experience and resources. Time, however, has shown the opposite, going after goals and starting a business from scratch is worth the effort”.

Nowadays Arara is a tour operator based in Armenia offering tour packages in the Caucasus and Central Asia. But when they started there was no business model, no money, no investors- just motivation to start, create something which would lead to living a fulfilled life.

“We turned to a friend’s father for advice (doing it the Armenian way), who had a travel agency, later we bought a WordPress theme with 50 dollars”. Failing is tough, but there are always solutions when you go to the roots of the problem. Experimenting with the website,  failing and starting over, again and again, moving from Russian to Western and European markets, changing and improving travel packages finally led to forming a unique and actually working business. Business from 0 (or from 50 dollars ) has grown to be a 1.5million dollar business during 6-7 years.

Here you can get acquainted with the story of two very fun and cozy places for hangouts in the town. Everything started with Hemingway’s pub- a retro-style popular venue both among locals and Yerevan travelers (yes, in pre-corona times they existed). There is this classic checklist for someone who wants to open a bar: someone who loves talking to new people, who is a pro at mixing drinks and not cut out for the traditional nine-to-five grind. These could definitely describe Gevorg Poghosyan back in 2012 when he founded Hemingway’s. A typical Armenian guy who returned from the Army, and wanted to earn a living outside of the boring employer/employee settings. The job of a bartender and constant strive for enhancing knowledge for the entrepreneurial path eventually led him to open his own bar. Being a natural storyteller he managed to bring people together through meaningful conversations and connections turning Hemingway into a relaxing and casual spot for late-night gatherings.

The success of Hemingway gave birth to a new tasty corner for lavish night outs- Compote Bar and Grill Garden. Opened just a month ago Compote already stands out and attracts customers. One of the most powerful lessons in the entrepreneurial world that can be related here is that everything goes more smoothly when you do what you love and what you’re good at.

When asked about the eye-catchy, caramelized name of the company, the answer doesn’t let you wait long.“We just wanted to bring something sweet to the digital world”. Arsen Sultanyan founded Digital Caramel in 2017 because of some changes in the work-life. He started in a rented office with 1-2 employees as a marketing company, but later gauging the health of the business switched the direction of Caramel. With 10-year experience in business, Arsen was not afraid to go after new opportunities and start over, though every time it’s like falling in love again. You get butterflies, you have fears, but you’re blinded by the enthusiasm for your new project and possibilities that await.

Today the company offers all the necessary tools for professional monetization of websites. If you want to survive in the business world of digital advertising you should use the available technologies, but always keep abreast of the trends to stay one step ahead of changes (keeping in mind that your business growth depends on technology giants).  The digital landscape never stops growing, so they constantly keep an eye on upgrading and modernizing the advertising tools, which is a big challenge. “We are bringing in and developing new specialties in the industry of advertising technologies. Having specialists who are one-and-onlies in Armenia we’ve geographically expanded our services to CIS countries” says Arsen Sultanyan.

The idea of ProDigi was quite spontaneous when one day the founders decided to follow the path of the professional digital age. Though some people associate the company with the English electronic dance music band “Prodigy”, the marketing agency just enjoys being a “prodigy” in the digital world. Founded in 2017 has grown to be a digital marketing agency offering digital advertising and production services worldwide.

Pursuing her career in social media marketing, Aida Vopyan worked as the head of the SMM department in one of the Armenian leading marketing agencies. However, there were changes in the senior management of the workplace that made her leave the new office culture. After careful consideration and some sleepless nights, she has finally decided to found her own agency. So instead of searching for a new job, ProDigi became reality with the 2 months salary that she managed to save up. Now Aida is the CEO of ProDigi leading a 20-member digital team, which is a rather challenging job. “When you start your own business it’s not only putting the glamour CEO label and sitting in the cozy office. You should be ready for everything: you are the CEO, the accountant, the janitor, the marketing specialist, the sales manager, and whatever else is needed at the moment”.

There was always a fear of becoming the next ordinary company in the world, as digital agencies are springing up like mushrooms. Thus, from the very start, the company was focused on bringing new values, developing the marketing culture, and educating the market. A huge motivation for the company was the partnership with Audi and Porsche within a month and a half after opening. Thanks to them the team was even more encouraged to take big steps and put in their best efforts working 24/7. According to Aida, the time has shown that no one can ensure your risks will pay off, but it should never stop you from taking the risk. If you want your business to succeed be ready to be a risk-taker.

Simply Technologies is a software design and development company, specialized in mobile and web applications using full-stack JavaScript. Harut Muradyan and Alexander Adamyan have bootstrapped their way to business success, founding Simply in 2011. Prior to starting the company, the two software engineering enthusiasts worked in international organizations gaining hands-on experience and skills, which later was invested in delivering their own high-quality software solutions.

They started in an office, which was a studio apartment with two computers and could afford to have an employee only after 3-4 months. At the beginning of their business journey, most of the would-be entrepreneurs find it important to focus on bringing innovative, quality solutions to their industry. But even more important is to acknowledge that the product/service might be the most important thing, but not “the everything”.

Simply Technologies was not an exception facing similar bottlenecks that kept the business from growing. “Take your time to test the bones of your killer product before racing towards going public. You will find success innovating in ways that go beyond products, for example in your marketing, sales, your team, customer service, etc. ” says the company CEO, Harut. Today the Armenian company simply enjoys being loved and trusted by many international companies (mainly Australian and American).

For some people founding a business is about opportunity- chasing the right idea at the right moment, but for many others, it’s born out of necessity. The story of DataCom is connected with the latter- you need a job, so you create your own. DataCom was founded in Yerevan in 2018 by IT specialists with a strong tech background, who suddenly lost their main job. They decided to take the plunge and start their business exclusively at the expense of their limited resources.

Turns out “if not the right idea and opportunity, then the right time and right people”. They couldn’t afford to rent a space or take a loan, because of poor credit history. “For months we had no job, no money. We just knew we had each other's back and DataCom, which was our small hope”.The founders, Vahagn Navasardyan and Andranik Manukyan ensured there were a lot of desperate moments in the beginning. “When we actually began to work we had 1 notebook, 1 computer and 100.000-dram debt, which later increased tenfold, but we didn’t give up”. And now from 1 customer, we’ve matured enough to increase the number of active and regular users and to expand the list and geography of services provided.

People here are natural problem-solvers; wherever the customers see difficulties or problems, they see great opportunities. At the moment the company is focusing on the implementation of forest fire prevention systems, digital libraries, and safe traffic infrastructure in Armenia. In the nearest future, they plan to go worldwide offering AI solution-services powered by more sophisticated algorithms for the global market.