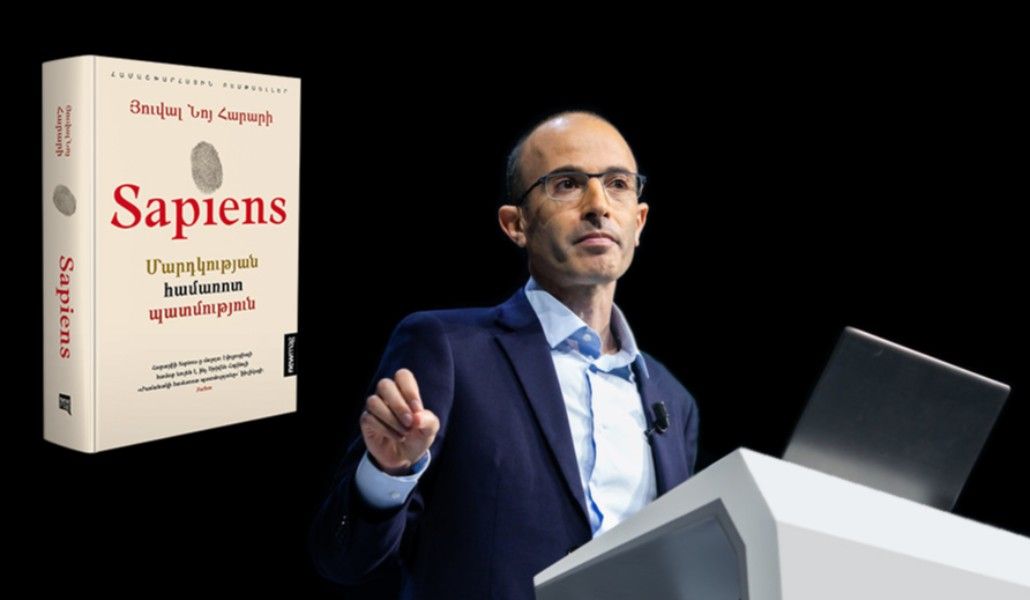 “Sapiens: A Brief History of Humankind” by Yuval Noah Harari translated into Armenian: A Joint New Project by Newmag and Galaxy Group of Companies

“Sapiens: A Brief History of Humankind” by Yuval Noah Harari translated into Armenian: A Joint New Project by Newmag and Galaxy Group of Companies

One of the most influential historians and philosophers of the 21st century, Yuval Noah Harari’s book Sapiens: A Brief History of Humankind has been translated into Armenian. The book by the well-known Jewish intellectual—who is beloved by many world leaders and is a keynote speaker at the World Economic Forum—is presented to the Armenian readership by Newmag Publishing House in partnership with Galaxy Group of Companies. Sapiens has been translated into more than 50 languages, sold 12 million copies and topped the New York Times bestseller list for five years in a row.

“There is a great need for social science history and political science literature today. Contemporary non-fiction books are especially important in understanding the political, social movements and events from all over the world as well as Armenia, and in giving them a rational assessment,” said Gnel Nalbandyan, Editor-in-Chief of Newmag.

In Sapiens, Harari tells the story of how the human development influenced the world ecosystem and created empires. The author combines history and science, reviewing the prevailing views, linking past developments with modern issues, and examining individual events within the context of bigger ideas. Harrari’s book, which is very original and unique in many regards, breaks all the stereotypes about historical books. Its history dates back to 70,000 years ago, right at the onset of the rediscovery the world.

"As an entrepreneur who dreams about seeing Armenia on the global map of innovation, this partnership and translation of the trilogy has several objectives for me, personally, and our team. First and foremost, to be part of the global agenda and dialogue, and to be involved in discussions regarding the future. Second, to present the newest and highest quality literature of global significance in Armenian. And third, reevaluate the future of our country based on our renewed understanding of the world,” said Gurgen Khachatryan, Co-founder of Galaxy Group of Companies and Chairman of the Board of Directors at Ucom.

Harari's Sapiens: A Brief History of Humankind, which is based on scientific evidence, presents the past of humankind and the major upheavals that have taken place in the past, which still, to this very day, have a great impact on many people, societies and states. Thanks to the first translation of Harari's trilogy, Galaxy Group of Companies and Newmag Publishing House promise an interesting project that will invite new discussions, thought discourses and the creation of intellectual capital.

Due to the coronavirus, the presentation of the Armenian translation of the book will take place online, live on Armenia TV’s "Good Morning" program on July 6, at 10:15 am. The book will be available in all bookstores from July 6.

Galaxy Group of Companies is one of the biggest holding companies in Armenia, uniting 15 companies in 3 countries. Most of the company's turnover is directed towards the implementation of social responsibility programs in Armenia in the spheres of education, social development and art, cooperating in particular with the Teach for Armenia Foundation, Armenian State Symphony Orchestra, Startup Armenia Foundation, Creative Armenia to develop thought leadership and intellectual capital in Armenia.

Newmag Publishing House is one of the leading publishers in Armenia. Founded in 2007, Newmag published a magazine, its namesake, until 2018. In March 2018, the company took a different direction, focusing on the publishing industry. And already in 2018, Newmag presented Armenian and world bestsellers to the public.