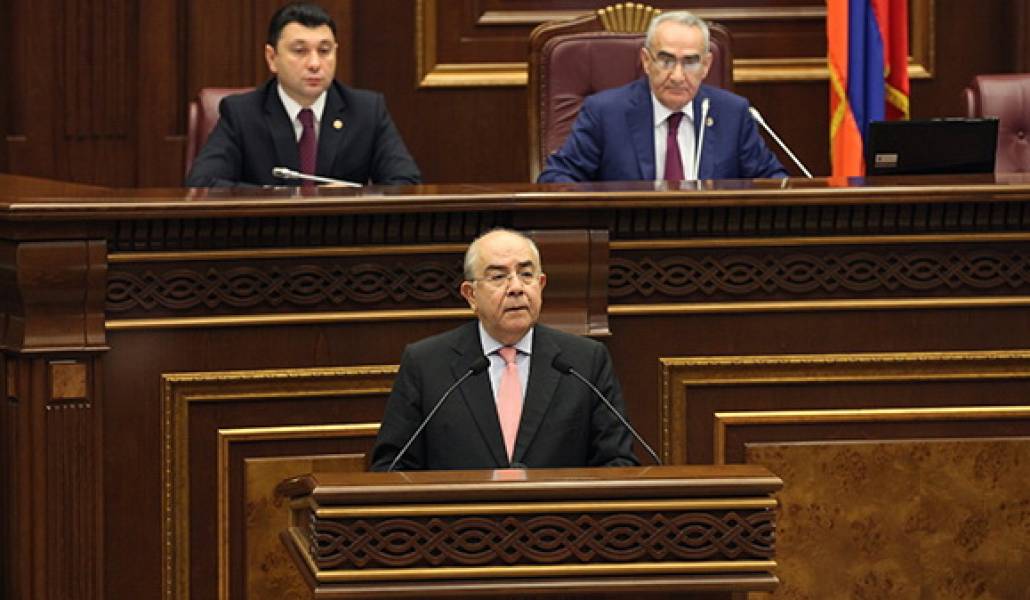 Speech by the President of the House of Representatives of the Republic of Cyprus Yiannakis Omirou at the RA NA Extraordinary Sitting.

Dear President of the National Assembly,

It is a great honour for me to be in the friendly Armenia on an official visit at the cordial invitation of the NA President of the Republic of Armenia Mr Galust Sahakyan and deliver a speech in the National Assembly of the Republic of Armenia, for which I express my deep gratitude. I am sure that within the framework of this visit the meetings envisaged with the political leaders will have their unique role in more strengthening of the existing excellent relations.

Today my presence here is the obvious proof of the years-long friendship between the Cypriot and Armenian peoples and once again it confirms it. The basis of this friendship is the sincere solidarity, which has repeatedly been shown in difficult situations. The presence of the Armenian Diaspora in Cyprus is an additional guarantee to continue our relations and more strengthen them, creating a wide and multilateral format in political, economic, military, educational and cultural spheres. Here, today, the presence of Mr Mahdessian, a dignified representative of the Armenian Religious Group in the House of Representatives confirms our commitment of preserving inseparable relations with Armenia.

The mutual support of our two countries is based on firm bases, and it has been hardened with jointly struggles against the common enemy torturing our peoples until now, as well as on the basis of common values and principles, to which we adhere.

From this high tribune in the name of the members of the House of Representatives and the people of Cyprus I would like to express our gratitude to Armenia for pursuing stable policy of principle for the benefit of freedom and re-unification of our country and people. We are aware of the price that you pay for your support, and we are thankful for that.

As you know, it has been forty years that Turkey keeps occupied the major part of the territory of the Republic of Cyprus, violating the norms and principles of the international law. The Cypriot side is adherent to reach the fair solution of the problem in accordance with the European law, the agreements reached in the high instances of 1977 and 1979 and the UN relevant resolutions. However, all our efforts clash with the Turkish intolerance and impudence. Turkey proposes conditions, which, undoubtedly, lead to a solution, on the basis of which is laid the principle of ‘two states.’”

Despite the fact that the steps of Turkey are internationally condemned, and as vivid evidence, recently, on November 13, the European Parliament adopted a distinct resolution, the violations being committed by Turkey are strengthened and the whole region is destabilized. At the same time the state and military figures of Cyprus directly threaten to use military force, if the Republic of Cyprus continues executing its self-sovereign rights.

In similar conditions the Republic of Cyprus was obliged to prevent its participation in the negotiations over the problem of Cyprus and announcing about undertaking political and legal steps against Turkey. I am sure you will agree that in the atmosphere of fear and the evident threat it will be illogical to continue the negotiations.

These manifestations of Turkey are well known for you. The prevention of signing the protocols of cooperation, due to well known reasons, at the last moment Ankara presents, serve as an expression of the same policy.

Despite the complications caused by Ankara, Cyprus and Armenia should activate the bilateral relations, unite their forces in the international organizations and use the levers of Cypriot and Armenian Diaspora in the decision making instances, forming a common front against the policy of Turkey. In the name of the members of the House of Representatives and my name I express full readiness to work in that direction.

Dear President of the National Assembly,

Once again I thank you for your invitation, warm reception and hospitality which we enjoyed. I wish that you have the same feelings during your visit to be paid to Cyprus in the nearest future.

I wish the Republic of Armenia and the Armenian people progress, welfare and quick fulfillment of expectations. It is possible that Armenia and Cyprus are not powerful countries but our inflexibility is justified. The force cannot make bow our peoples. In harder conditions we have survived and prospered. Fighting for freedom and justice the Armenian and Cypriot nations have stable will, and that is unshakable.