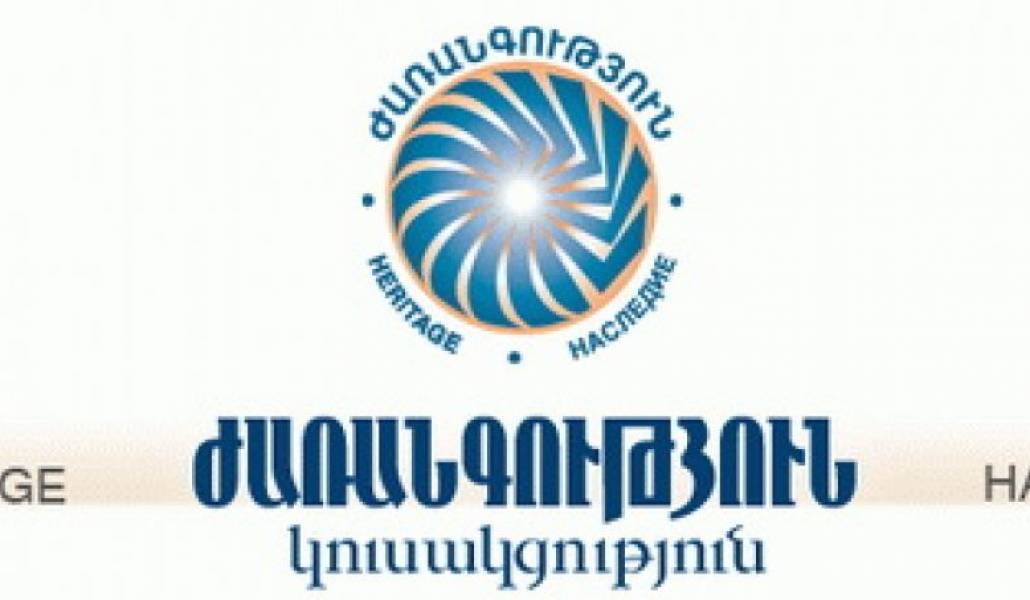 Heritage Party has issued a statement condemning Armenia's accession to the Eurasian Economic Union. A week ago today, on 10 October 2014, de facto president of the Republic of Armenia Serzh Sargsyan signed a treaty on Armenia’s accession to the Eurasian Economic Union (EEU) in Minsk. The Heritage Party - denounces the signing of the accession agreement to the EEU on behalf of the Republic of Armenia, considering it an unconstitutional measure against the sovereignty of Armenia and Artsakh, and a most serious threat to both states’ independence and security; - rejects Serzh Sargsyan’s unilateral, illegal, hasty, and promiseless decision, which was made without any prior public discourse or the engagement of political forces, and which has further deepened the skepticism and lack of confidence of the majority of the public toward the aforementioned determination; - and in general calls for the Mountainous Karabagh Republic's recognition, at least by Armenia, as a precondition to Armenia's membership in any international or transnational institution. With this dignified and fundamental logic, the Heritage faction in the National Assembly has proposed to the legislature adoption of a resolution on the recognition of Artsakh before the debate and vote on the treaty of accession to the EEU, and trusts that this approach will become a unique opportunity for national consensus; - underscores the urgent need for a clear and comprehensive program for regulation of the smoldering Artsakh-Azerbaijan conflict, which has now been replaced by a "diplomacy" that serves the interests of the acting authorities and by the glaring absence of political will and their incapacity to reap relevant returns from international political developments. It is evident that Armenia stands not so much as an equal partner, but as a "poor cousin" or instrument to exert influence upon others. And in this case, the minimum price to be paid to Azerbaijan is Artsakh, the double formulations pronounced in Astana as witness; - finds that the deplorable efforts of the republic’s regime to compel Armenia’s accession to the EEU, together with Serzh Sargsyan’s domestic and foreign policies that do not flow from Armenia's national interests, aim merely to maneuver and perpetuate his illegitimate personal power obtained through falsification of the past elections. It is quite clear that Mr. Sargsyan, who has usurped power through unjust elections, is not authorized to sign any agreement or undertake any obligation on behalf of the people of Armenia; - reaffirms that this anti-national agreement with its null-and-void signature should not be ratified by the National Assembly or, in case of its ratification, must include the mandatory precondition of Armenia’s recognition of the Mountainous Karabagh Republic. It is manifest that the shortest and most effective way to resolve these and all derivative issues is the expeditious and complete removal of today's authorities, which is the imperative demand of the overwhelming majority of Armenia’s citizens―and of its Constitution. Heritage Party Board Raffi K. Hovannisian, Chairman 17 October 2014 Yerevan