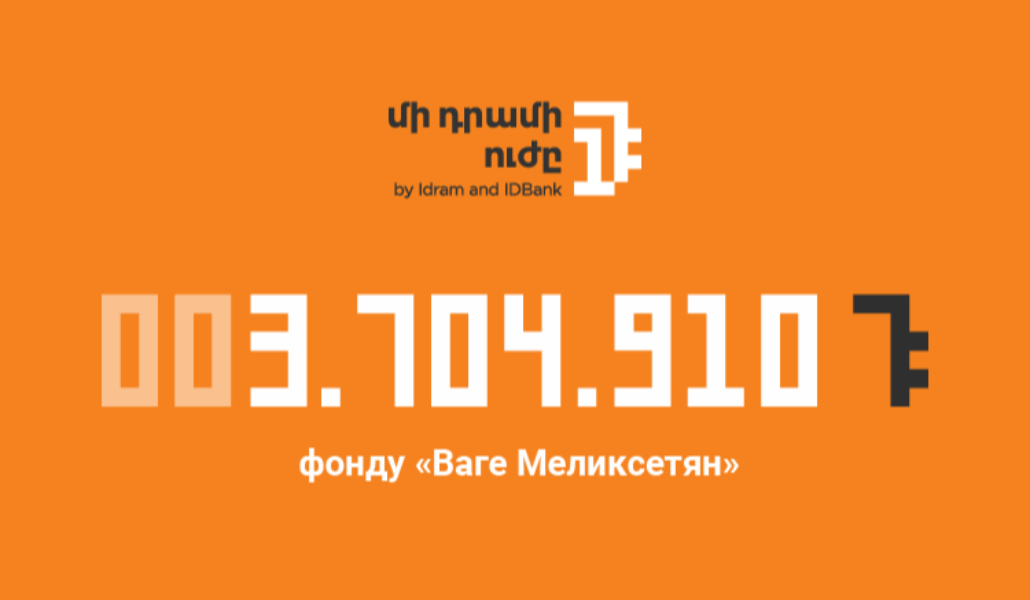 "The Power of One Dram" to overcome childhood cancer

“The Power of One Dram” initiative of IDBank and Idram has summed up the results of the next program: the entire amount of “one dram” gathered in August from user payments, AMD 3.701.910, was transferred to “Vahe Meliksetyan” foundation.

The fund was created by Vahe’s brother. Vahe fell in the 44-day war, and the fund was created to continue Vahe’s work. Vahe carried out his medical mission until the last moment, and died while providing medical assistance to a wounded soldier. A clinical pharmacist by profession, he did his best to make his profession even more popular.

“August was quite active in terms of payments through the Idram&IDBank application, and this only makes us happy, because thanks to payments and the goodwill of our users, we were able to allocate about AMD 3.7 million to this recently created but promising fund, which has not only educational, but also purely charitable programs. We hope that thanks to “The Power of One Dram” initiative some of Vahe’s dreams and goals will come true”, said Gor Amiryan, the head of Marketing unit of Idram company.

The next beneficiary of “The Power of One Dram” initiative is the Armenian Children's Health Foundation. For more than 10 years, the director of the foundation Armen Martirosyan has been supporting children with serious illnesses by raising funds, organizing their treatment abroad.

As Tatevik Vardevanyan, the head of Communications unit of IDBank said, in the September turmoil, it was especially important to remember children who are deprived of the beginning of the school year and the opportunity to have fun with friends and relatives, as they are in a struggle for life. “When making payments over the next two months, it would be nice to have this idea in your head, heart, make payments through Idram&IDBank and help raise more money”, said Tatevik Vardevanyan.

According to Armen Martirosyan, director of the Children’s Health Fund of Armenia, the fund helps those children with cancer, whose treatment is impossible to organize in Armenia, and it is necessary to organize it in the leading clinics of the world. The Foundation also helps other children with life-threatening diseases, the treatment of which can be organized in foreign and Armenian medical institutions.  . “Every dram matters, and we are very pleased that “The Power of One Dram” initiative will be directed to our foundation over the next two months. It is thanks to such initiatives that our society feels like a part of charity, and children who are beneficiaries of our foundation get the opportunity to receive much-needed treatment abroad”, mentioned the director of the fund Armen Martirosyan.

Continue making payments through Idram&IDBank application, IDBanking.am online platform or the terminals of the companies: “The Power of One Dram” has already transferred more than AMD 37 million to foundations in the fields of education, health care and social responsibility:

THE COMPANIES ARE CONTROLLED BY CBA