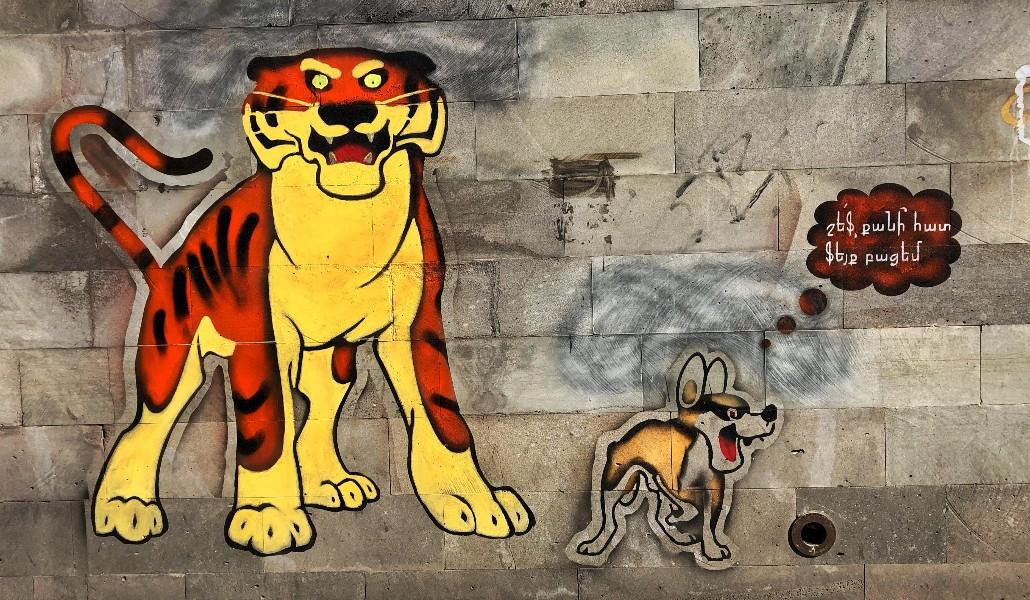 On Sunday, I felt like Don Quixote as if I was fighting the windmills, and in the end, I was left with a broken spear. Everything started when my colleague, who had returned from abroad, published a photo on the Facebook page of A1+, a media outlet, showing how salt was being scattered by hand in the streets after the snowfall.  Astonished by this photo that they fight against ice in the same way as about 20 years ago, he had captioned the photo: "B.C."

Though the sidewalks had become impassable and icy after several hours of snow, a flood of comments began beneath that photo, particularly, "Don't you see how the authorities work?"

After removing another profanity with sexual content and asking not to swear, I realized that “I am fighting” against fake profiles—with fake photos and names—for about three hours. Reading the comments, it was obvious that the picture would be the same if the photo title were in a positive sense.

The sense of wasted time reminded me of a conversation that happened last night when my interlocutor had expressed very strictly about fake profiles, considering them an insult against real profiles.

Anzhela, my interlocutor, had explained it this way: If you falsify your passport details, the law will punish you; it should be the same with social media, as social media become an integral part of our lives, and we trust virtual friends—sharing our most sincere moments and feelings.

What to do with fake profiles?

The Velvet Revolution that has taken place in Armenia in 2018 continues on Facebook, but calling it “velvet” is already wrong. There are two main “armies” on Facebook: revolutionaries and counter-revolutionaries, and the battles between these armies are taking place without any rules.

On April 4 of last year, Prime Minister of Armenia Nikol Pashinyan urged the National Security Service of Armenia (NSS) to fight against fakes in a way that will not put the right to freedom of speech and expression at risk.

The NSS does not respond to the question of A1+ about how many fake accounts have been revealed in the course of ten months without putting the right to freedom of speech at risk.

However, the public has been only informed about two cases of fakes yet, and according to the NSS, both of these cases have been in their spotlight and were charged with causing significant damage to the national security interests of the Republic of Armenia․

By the way, after Nikol Pashinyan’s well-known order to the NSS, Samvel Martirosyan, a Social Media and Information security analyst, doubted the fact whether it would be possible to implement such security without putting the freedom of speech at risk. "I do not understand what kind of mechanisms would be implemented in this case, especially when taking into account the fact that Armenia does not have the legislative restrictions for such things," he said.

“I am in the target of some people’s fake ‘armies.’ I guess there is a task to comment on every word and idea which are posted on social media in order to humiliate my dignity,” says Ani Samsonyan, the deputy of the RA NA “Bright Armenia” Faction.

According to the opposition MP, these attacks are permanent, but they are especially active on the days when she criticizes the Armenian authorities. This circumstance has convinced her that these “attacks” by fake accounts have been directed by the authorities; “It is logical, isn’t it? Who else should I associate these activities with?”

“I don’t know about such information,” Shake Isayan, the opposition MP from “Prosperous Armenia” faction, says to the question on so-called fake “armies.”

She can’t say whether there is a specific force, that fights on social platforms using fake accounts, but she can say that their activity is obvious.

“From time to time, when one shares his\her opinion, which the other political forces do not agree with, some fakes accounts start actively commenting on the announcement,” she says.

Kristine Poghosyan, a  member of the parliamentary majority “My Step” faction, was surprised by the opinions of her colleagues about the Armenian authorities and the faker accounts.

“I urge all those who have such information about the fake accounts to apply us and we will deal with that problem through law enforcement. I exclude such a ruling style of the current governing,” she says.

Kristine Poghosyan also insists that fakes are not only cursing but also threatening her. She brought the example of her interview with a media outlet about the names of Hrayr Tovmasyan, the head of Constitutional Court of RA, Arthur Vanetsyan, a former head of the NSS of Armenia, and Robert Kocharyan, the second President of Armenia.

“I received hundreds of letters with threats and curses. A lot of posts have been made with my photo, using my words out of context,” the deputy says. “The criticism should never be followed with a curse, I can criticize any political or public figure, but I shall never use any cursing word because it speaks of a person’s educational low level.”

Arpi Davoyan, another MP of "My Step" faction, also demands proof from the opposition for the statement that the government has fake accounts and tries to offend the critics with their help. “Let them prove it. I can also make any statement without proof.”

Generally, she believes that a local fight against fakes is impossible. She has learned herself to ignore the Facebook comments: "I don't have that much time to read all Facebook posts."

But the fact is that not everyone is able to ignore such cursings under their posts.

How to fight against such comments on social media?

“I always say that there is no state that will show such a legislative initiative through which fake accounts on social networking will be eliminated. It is a fairy tale,” says Ani Samsonyan, a deputy of the “Bright Armenia” faction.

According to her, the solution to such an issue should be unique, every user must “clean” his\her social media account. First of all Ani Samsonyan emphasizes the politicians, who do not delete the cursings made on their posts.

“According to the Civil Code of Armenia, the cursing is punishable when you apply to the court to receive moral compensation. But on Facebook everyone is cursing, sometimes you don’t know that person and can’t identify him\her in order to apply to the Court and demand compensation.  It means that it’s left to an individual— to me, to those users who don’t tolerate insults on their pages,” she says.

Deputy Kristine Poghosyan reminds me that a few months ago she was for criminalizing the blasphemy, but then she realized that the source of such a phenomenon is not the law. “We cannot eliminate blasphemy in a day, because it speaks of the educational level of a person, and we must fight against it by rising the educational level,” the deputy says.

Arman Babajanyan, an independent MP, introduced the draft fake news law in December 2019  to criminalize the spread of fake news. But there is nothing in this draft about cursing users.

As for the disseminated fakes, it is obvious for new government that they have become a political tool in the hands of the supporters of the former authorities. By the way, the two fakes that the NSS has identified have been charged with inciting national, racial or religious hatred. Otherwise, they would not be arrested for spreading fake information.

Last year the court satisfied Marina Poghosyan’s, “Veles” human right non-governmental organization president’s claim and imposed user Astghik Ter-Sahakyan to apologize and pay AMD 500,000 for making an offensive and sneaky note.
And this is not the only claim of Marina Poghosyan against her offender on Facebook. As Datalex Information System reports, the second case is still in process. The same system notifies that there are more Facebook posts that have reached the court, and it is obvious that there can be scandalous cases involving politicians. There is already a case like this.

At the end of last year, President of the National Assembly of Armenia Ararat Mirzoyan applied to the court to claim against Narek Simonyan, the president of “Civic Conscience” NGO, for his Facebook post that insulted and sneaked his honor, dignity and business reputation, demanding 3.5 million AMD (7000 euros).

While wars against fake accounts continue, Armenian media outlets have to create a special job for “cleaners” for moderation in the social platforms. Unlike the lawmakers, they cannot ignore those comments, as there is a precedential decision by the ECHR, when at Delfi AS v. Estonia case the online media outlet lost for not removing the offensive comments. To note, in the aforesaid case the issue was the comments on the website and not on social media, but who knows…

Armenia has its own precedent when a journalist was fined AMD 50,000 for Facebook post and forced the journalist to disseminate a refutation as while publishing a post about a certain media outlet “no activity to check its authenticity was carried out”.

According to the medial experts, this decision equaled Facebook post to a journalistic article published on the media outlet and the judgment was made according to its status.