Best job in the world, according to John Heffern 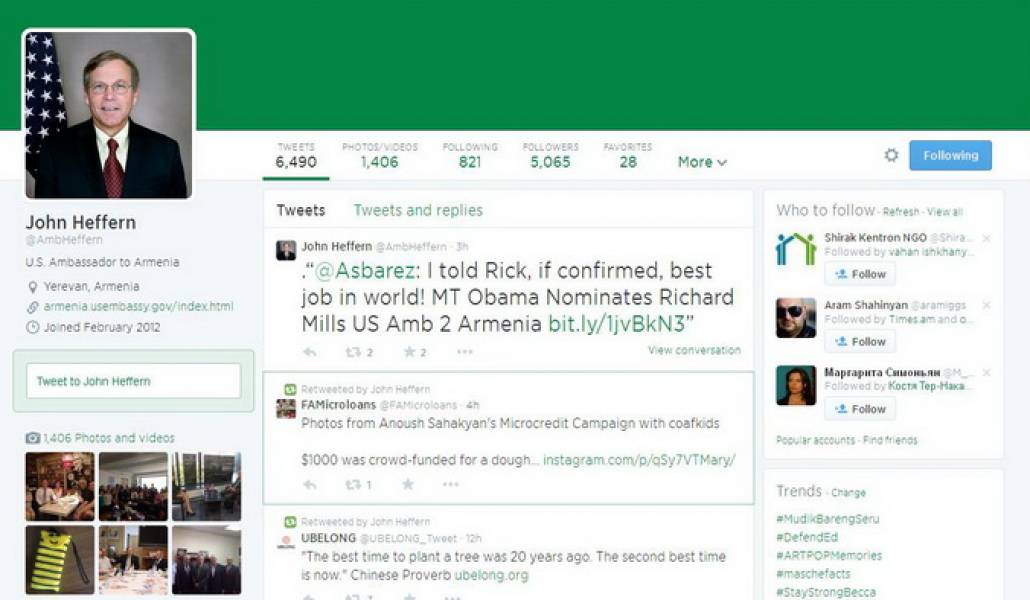 U.S. President Barack Obama nominated on Thursday Richard M. Mills, Jr. as U.S. next ambassador to Armenia. If confirmed by the Senate, Mills will replace current Ambassador John Heffern. “I told Rick, if confirmed, best job in the world!” John Heffern wrote on his Twitter post. Mills is currently Deputy Chief of Mission at the U.S. Embassy Beirut, where he began his tour in 2012. Richard Mills assumed the role of Chargé d’Affaires of the U.S. Embassy in Malta, ad interim, in June 2011. Since August 2010, he had been serving as the Deputy Chief of Mission for the Embassy. Mills joined the Foreign Service in 1988, serving at Embassy Paris as a consular officer, then as staff aide to the Ambassador. He returned to Washington to join the Soviet Desk, eventually becoming desk officer for the newly independent Armenia and Azerbaijan, followed by a tour as a political officer at the U.S. Consulate in St. Petersburg, Russia. From 1996-98 Mills served in the Executive Secretariat, followed by a tour as economic officer at Embassy Dublin from 1998-2001. Subsequent tours included Political Advisor at the U.S. Mission to the UN; Deputy Political Counselor at Embassy Islamabad; and Energy Attaché and Acting Economic Counselor at Embassy Riyadh. Rick was Political Counselor at Embassy London from 2006-2009. Immediately prior to his Valletta assignment, Mills served as the Senior Democracy Advisor at Embassy Baghdad, where he managed $325 million in State Department democracy and human rights programs. Mills is a graduate of Georgetown University’s School of Foreign Service. He also holds a law degree from the University of Texas School of Law and received a Masters Degree in International Security Affairs from the National Defense University in 2005. Prior to joining the Foreign Service, Rick practiced law in Washington D.C. Mills is married to Leigh Carter, a retired Foreign Service Officer. Rick’s foreign languages are French and Russian, asbarez.com writes.